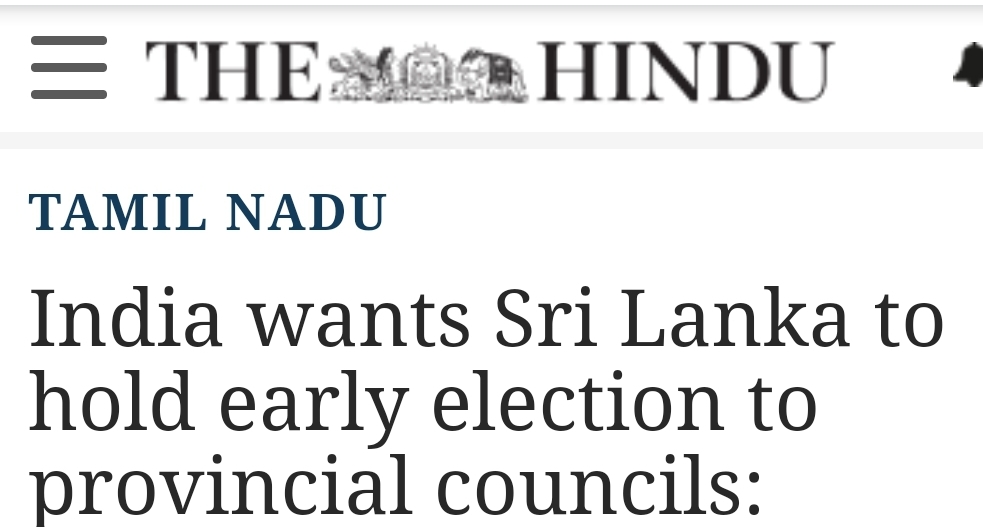 The Hindu : India supports the call of international community for the Sri Lankan government to fulfill its commitments on devolution of political authority including through early holding of elections to provincial councils, according to S. Jaishankar, External Affairs Minister.

This also covers the commitment of ensuring that all the provincial councils are able to operate effectively in accordance with the 13th Amendment to the Constitution of Sri Lanka, Dr. Jaishankar has stated in his letter sent recently to the AIADMK’s Member of Parliament (Rajya Sabha) M. Thambi Durai.

Pointing out that the position of India was conveyed during the deliberations on the motion at the Council, Dr. Jaishankar said the country voted in abstention at the UNHRC but it made a “strong statement” as Explanation of Vote, stressing “our abiding commitment to aspirations of the Tamils of Sri Lanka for equality, justice, peace and dignity.” It had also urged the Sri Lankan government “to carry forward the process of reconciliation, address the aspirations of the Tamil community and continue to engage constructively with the international community.”

During the consideration of the resolution at the Council on reconciliation, accountability and human rights in Sri Lanka, he said India had remained “closely in touch” with all countries and made a statement at the interactive debate on February 25, outlining its position.

Assuring Mr. Thambi Durai that “all efforts are being made to ensure that the safety and interests of Tamils in Sri Lanka are fully safeguarded,” the Minister said the country “attaches high importance” to the matter.(The Hindu)