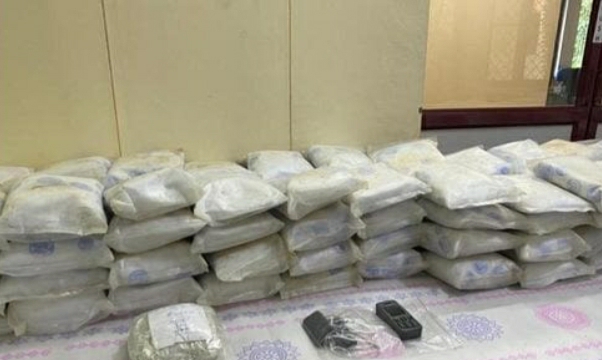 The Narcotics Control Bureau of India (NCB) on Monday seized nearly 340 kg of heroin from a Sri Lankan shipping boat and arrested five people for drug trafficking in Kochi, people familiar with the matter said.

Officials said the Indian naval ship Suvarna intercepted the Lankan boat “DU Shashila” in the high seas of the Indian Ocean on suspicion of drug trafficking and brought the boat to Kochi’s Mattancherry Wharf for an extensive search by the NCB.

The preliminary search did not yield anything. But a thorough hunt for the narcotics led investigators to the 340 packets of heroin concealed in ice in the boat’s cargo hold. A senior NCB official said each packet was stamped with a crown symbol with the words “KING 2021”, a practice followed by drug trafficking syndicates to brand their merchandise.

According to the NCB, the consignment has a street value of ₹340 crore in India, and ₹1,750 crore in the international market.

“This is a major catch not only in terms of the quantity and cost but also from the perspective of disruption of the illegal narcotics smuggling routes, which emanate from the Makran coast and flow towards the Indian, Maldivian and Sri Lankan destinations,” a defence ministry statement said. (The Hindustan Times)