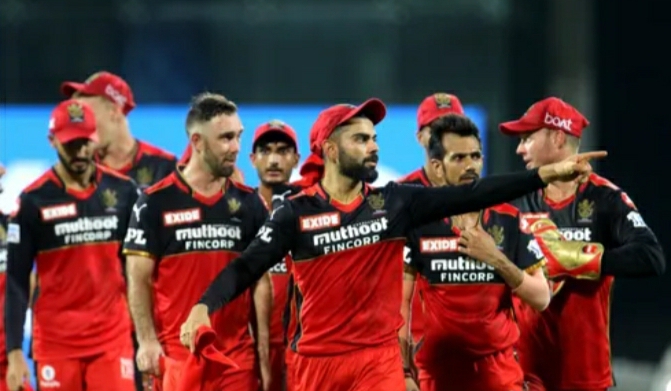 Royal Challengers Bangalore registered their third win on the bounce after beating Kolkata Knight Riders (KKR) in Match 10 of the VIVO Indian Premier League (IPL) 2021 at the M. A Chidambaram Stadium in Chennai on Sunday.

Glenn Maxwell’s explosiveness and AB de Villiers’ clean hitting was on full display as RCB put forward a commanding total of 204/4 and successfully defended the same against KKR, who fell short of the target by 38 runs.

KKR, who remained unchanged from their previous defeat, had a massive target of 205 to chase and needed an explosive start from openers – Nitish Rana and Shubman Gill.

Gill went berserk in the second over, clobbering two sixes and a four to Kyle Jamieson before the right-arm pacer got the KKR opener in an eventful over, thanks to a diving catch from Dan Christian at mid-on.

Tripathi, who walked in at 3 ,went after the RCB attack right from ball one and smashed 4 boundaries. But Washington Sundar got Tripathi caught near square-leg at the end of powerplay, with KKR 57-2 after 6 overs.

Rana went after Chahal straightway and hit the leg-spinner for two boundaries in an over but the trend of six and out continued for KKR as Rana tried to hit one more out of the park, only to find Devdutt Padikkal in the outfield as Chahal scalped his first wicket of the season.

KKR were completely on the backfoot and Chahal made the KKR feel that pressure with dot balls. Dinesh Karthik was the next man to be dismissed after getting rapped on the front pad, facing Chahal and KKR were 83-4 at the 10-overs mark.

Eoin Morgan, the KKR skipper, was still out in the middle, along with Shakib Al Hasan as the duo built a steady partnership and added 24 in the next three overs.

Both Morgan and Shakib targeted Maxwell and hit a six each in the 13th over but the KKR skipper departed after he was caught by Virat Kohli at extra-cover off Harshal Patel who got the vital wicket of Morgan.

With 79 required off the final four, Andre Russell, who joined Shakib at the crease, hammered Chahal for 20 runs, smacking three boundaries and a six to the leg-spinner.

The West-Indian all-rounder further crunched Jamieson for a six but the right-arm seamer finished on a high note after hitting the timber to dismiss Shakib and then got Cummins caught behind on the final ball.

KKR required 44 off 12 deliveries as Mohammad Siraj bowled an exceptional penultimate over to Russell, giving away just 1 run and prevented Russell from opening his arms.

Harshal bowled the final over and rattled Russell’s stumps and it was game over for KKR as RCB won by 38 runs to complete a hat-trick of wins.

Earlier RCB, who made one change, bringing in Rajat Patidar in place of Daniel Christian and played with three overseas players, elected to bat.

KKR started with spinners from both ends and it turned out to be a rewarding move as Varun Chakravarthy scalped the wickets of RCB skipper Virat Kohli and Rajat Patidar in the second over.

First, the RCB skipper tried to slice it over covers but was caught by Rahul Tripathi who took a brilliant running catch while Patidar was castled by the off-spinner, completely beaten on the inside edge.

However, Padikkal and Maxwell teamed up to lead the recovery for RCB as they finished the powerplay with a total of 45/2 and the switch-hit was out for the Big Show, who smashed 17 off the sixth over.

Chakravarthy was back to bowl the seventh over as KKR overstepped for the third time in the game. Maxwell greeted the free-hit with a flat six followed by a boundary behind square leg and RCB were on the move.

Maxwell brought up his second consecutive half-century, that too off 28 deliveries and the fearless approach worked in favour of the right-hander while the pressure moved back to KKR, with RCB 84-2 at the 10-over mark.

Padikkal took some inspiration from Maxwell played the reverse paddle for four before the left-hander holed out to deep mid-wicket as Tripathi completed his second catch of the game.

de Villiers joined Maxwell in the middle and although the next couple of overs were quiet, RCB had an opportunity to finish on a high with the situation they were in.

The AB-Maxi show was on display after the duo smashed 17 runs off Chakravarthy, who bowled his final over. First de Villiers hit consecutive boundaries to the leg-spinner and then Maxwell hammered the last ball for six with a trademark switch-hit.

The 16th over wasn’t any different as de Villiers went after Prasidh Krishna to bring up 11 runs off the over and a fifty-run stand with Maxwell for the fifth wicket.

Pat Cummins provided the all-important breakthrough for KKR, bringing an end to Maxwell’s fine innings of 78(49) with extra bounce.

de Villiers, as always for RCB, calm under pressure, with excellent strokes in his offering, finished the innings in grand fashion. The right-hander, supported well by Kyle Jamieson added 56 runs in the last three overs, smacking four sixes at the back-end of the innings.

de Villiers also brought up his fifty off just 27 deliveries and powered RCB to a commanding total of 204/4.