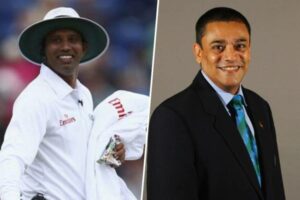 Sri Lanka Cricket (SLC) has named the match officials for the upcoming Test series against Bangladesh.

Read More : Young Kamil steers NCC to the championship with a ton

Kumar Dharmasena and Ruchira Palliyaguruge have been appointed as the on-field umpires while Prageeth Rambukwella has been named as the reserve umpire for the series.

Apart from them, Raveendra Wimalasiri (TV Umpire) and Lyndon Hannibal (4th Umpire) will also take up officiating duties during the Bangladesh Test series.

The two-match Test series between Sri Lanka and Bangladesh will commence on the 21st of April at Pallekele International Cricket Stadium.

The post Ranjan Madugalle and Kumar Dharmasena to officiate in Bangladesh Tests appeared first on ThePapare.com.