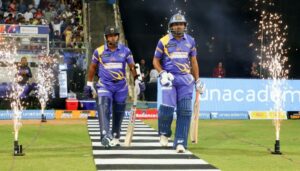 A veteran team from Sri Lanka made of legends of the game are set to leave to India to take part in the Road Safety World Series, in which five other countries are taking part.

The Road Safety World Series is a Twenty20 tournament featuring the global superstars of Cricket who have retired from the sport. They will also be lending their might towards a greater cause of creating awareness about road safety in India.

This festival of a tournament is approved by the Board of Control for Cricket in India (BCCI), and features some of the biggest names in the game from Australia, India, South Africa, Sri Lanka, West Indies, England and Bangladesh.

In the first edition, the series saw some notable retired players from India, Australia, Sri

commissioner of the series, while Sachin Tendulkar is the brand ambassador.

This year, Sri Lankan Legends are led by former Captain Thillakaratne Dilshan and will be joined by a few stalwarts like Sanath Jayasuriya, Nuwan Kulasekera, Upul Tharanga, Russel Arnold and Rangana Herath.