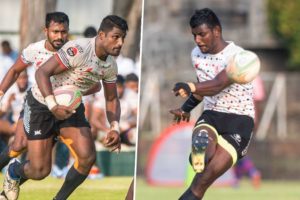 Navy Sports Club has followed in the footsteps of CH & FC, signing three key players ahead of the 2021 Dialog Rugby League.

Former national caps Sajith Saranga, Sathya Ranathunga, and Niwanka Prasad have made their way back home from CH & FC for the upcoming season. All three of them switched their allegiance to CH & FC in 2017.

The trio was instrumental in the Navy’s success story from 2012 to 2015 and will be looking to re-ignite that spark at Welisara.

Meanwhile, emerging player Samuel Maduwantha has also switched from CH & FC to Navy Sports Club ahead of the Dialog Rugby League. The dynamic flyhalf rose to popularity as a vibrant kicker during his school days at St. Anthony’s College.

Later, he continued his brilliance for CH & FC for three successive seasons. The continuous injuries kept the 23-year-old out of last year’s season.

The move to Navy should be a great value addition to the side who were lacking a consistent flyhalf last season.

Navy Sports Club finished 6th in the points table last year and is looking for a facelift in the upcoming season.

With the current situation in the country, the resumption of the Dialog Rugby League is still uncertain.