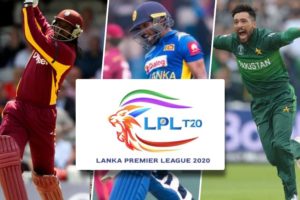 The player draft of the inaugural Lanka Premier League was held on the 19th of October and each franchise was allowed to pick 20 players for their squad respective squads, including 14 locals and 6 overseas players.

Except for the Galle Gladiators franchise, the rest of the franchises didn’t to pick all 20 players for their teams at the draft and will have to fill the gaps in their squads by the 1st of November, which is the deadline imposed by Sri Lanka Cricket.

There were some interesting calls from a few franchises and every squad seems to have their specific strengths and weaknesses. Here’s an analysis of how each 16-man squad is formed. 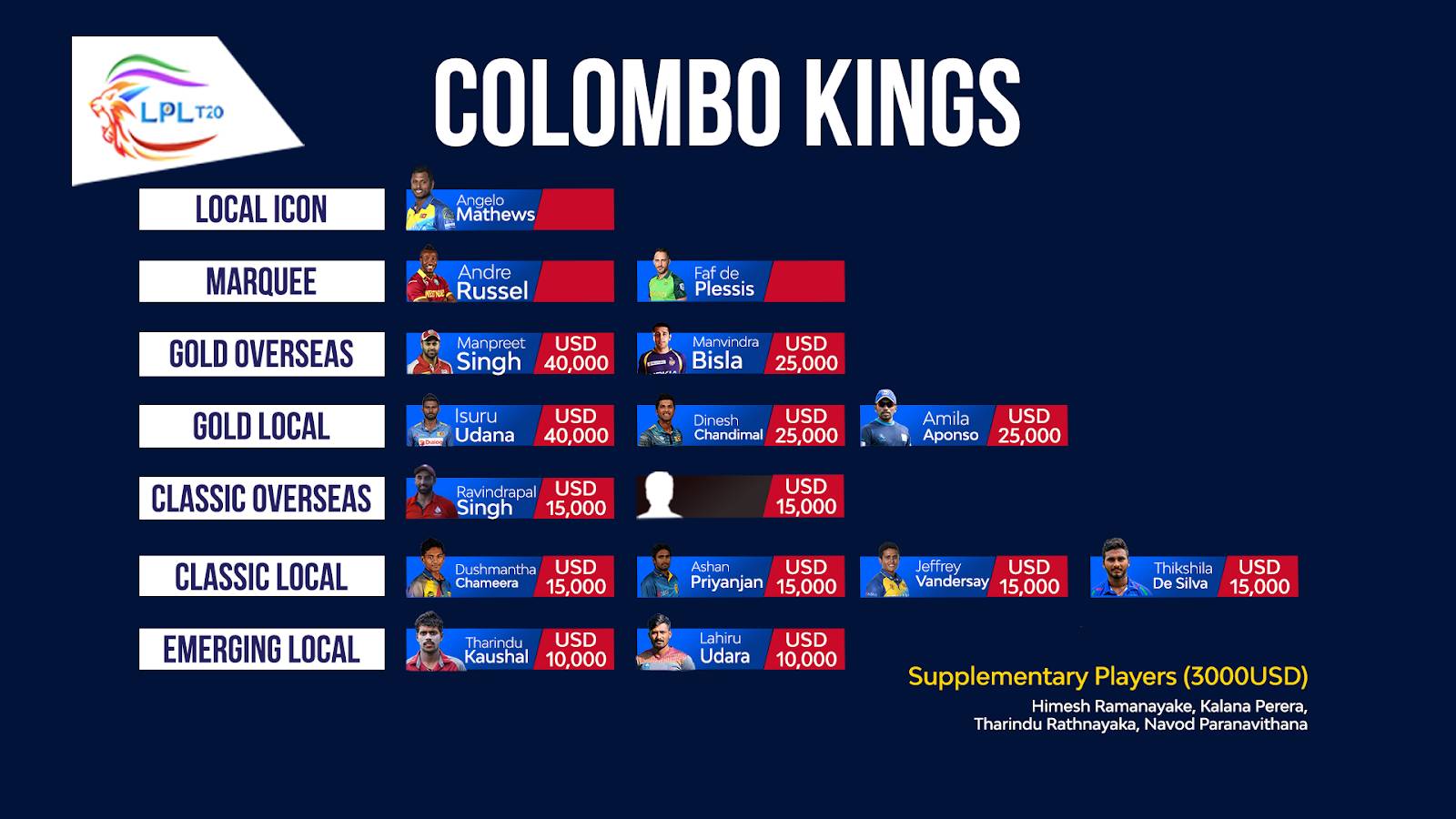 At first glance, the Colombo Kings squad looks like one of the strongest squads in the tournament. Their batting line-up is stacked with the likes of Faf du Plessis, Andre Russel, Angelo Mathews, Dinesh Chandimal, Lahiru Udara and Ashan Priyanjan who could potentially be deadly to the opposition. One of their overseas batsmen, Canadian Ravindrapal Singh is also a great smasher who could bat in the middle order.

The spin attack is also a plus for the Kings and left arm spinner Amila Aponsu is a great addition for the team as he is one of the leading performers in the domestic setup. National caps Jeffrey Vandersay and Tharindu Kaushal will also come in handy.

The Kings’ pace battery looks a little thin with only 3 genuine fast bowlers in the original 16-man squad and one of them is Manpreeth Gony, who hasn’t played much in recent years.

However, they will also have the services of Andre Russel and Thikshila de Silva in the pace attack and Angelo Mathews is also available to bowl. But Russel has picked up a niggle mid-IPL and his contribution in the bowling department could be limited just as is the case with Mathews. Dushmantha Chameera has only played 2 first class matches, 2 T20s in Army commanders league and a few T10 matches since returning from an injury in 2019. 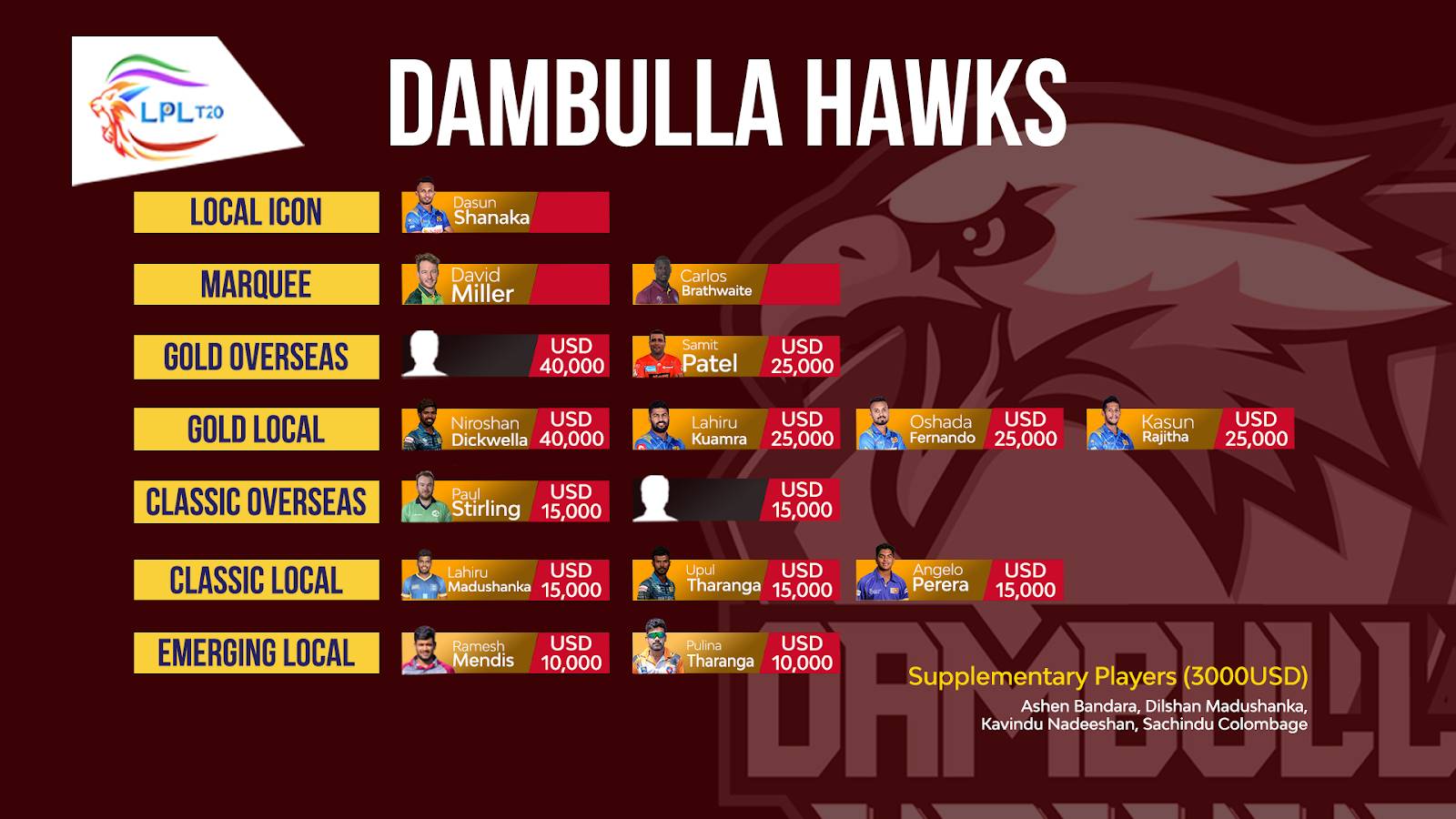 Dambulla Hawks coach Jon Lewis looked well-prepared in the online player draft and it shows when you go through their squad.  Needless to say, the batting unit looks amazing on paper. Irish Paul Stirling who has loads of experience battling the Rashid Khan-led Afghan spin attack is a great addition and can be effective in Sri Lankan conditions too.

It’s clear that Lewis has chosen the Hawks’ batting lineup with specific roles in the top, middle and finishing jobs.

The bowling attack lacks a genuine spinner apart from Pulina Tharanga but Ramesh Mendis and Samit Patel are more than capable of holding their own. They would dearly like another spinner in their squad with international experience in sub-continental conditions and with two overseas slots open, they would do well to recruit at least one such spinner. 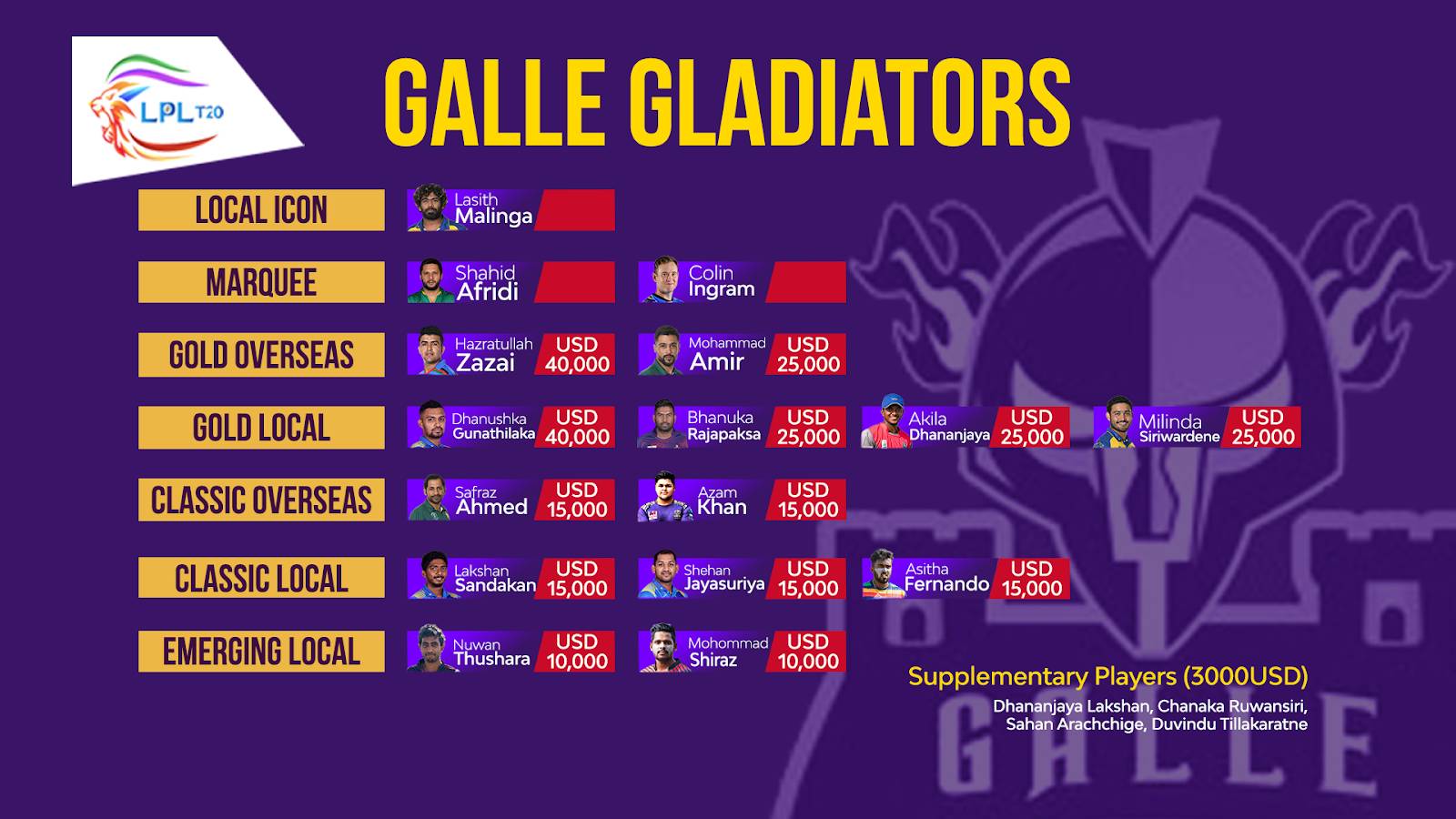 The Moin Khan led Galle Gladiators selection committee has done a commendable job, selecting a strong squad, especially ticking all the boxes in the bowling category. Be it spin or pace, Gladiators are packed with arguably the strongest bowling unit of the tournament.

The attack of legendary Lasith Malinga, Mohammad Amir and Shahid Afridi coming together will be a thrilling spectacle for fans around the world while Asitha Fernando and Mohammad Shiraz have proven themselves many times in the domestic setup. Two of Sri Lanka’s leading men in the spin artillery, Akila Dananjaya and Lakshan Sandakan will make their bowling attack more deadly.

Gladiators will face difficulty to balance their playing XI as most of their best bowlers are not known for their batting, which could leave them with a long tail in the playing XI. The squad also doesn’t have a fast bowling all-rounder who could balance things off. 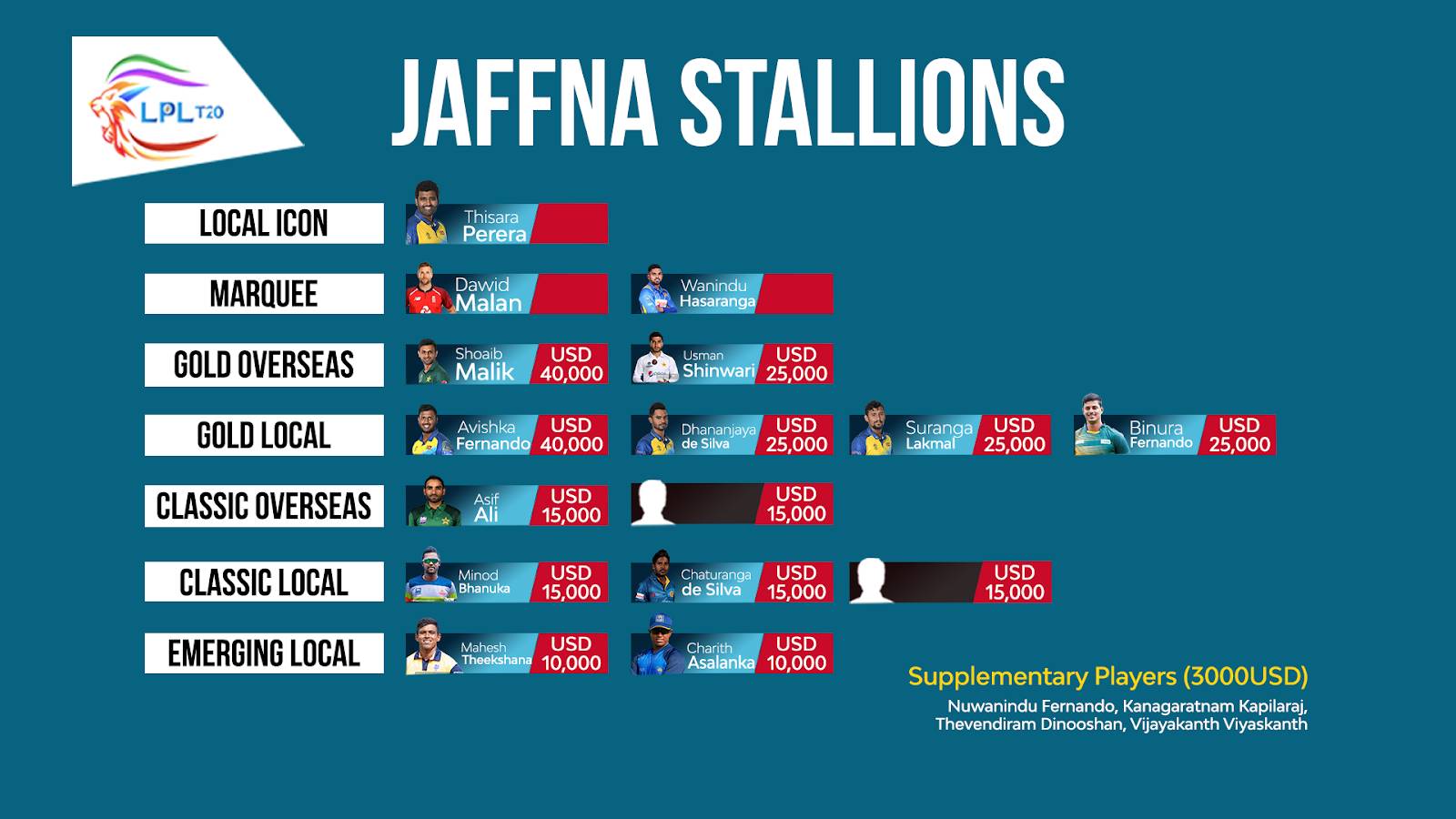 Jaffna Stallions are easily the most balanced squad in the tournament simply because of the strength of their all-rounders, who are all local players. Instead of choosing an overseas marquee player, they picked Wanindu Hasaranga in that category. Hasaranga has showcased his talent in the past year and why he belongs in that category. The combination of Thisara Perera and Hasaranga batting in the death overs will be a great asset for the Stallions and their bowling will also leave the door open for more batting slots in the playing XI. Apart from these two, Hasaranga’s brother Chaturanga de Silva is also an effective left arm spinner + handy batsman while Dhananjaya de Silva needs no introduction.

Stallions also boasts the services of current No 01 T20I batsman David Malan of England who has been in amazing form over the summer.

Their pace attack will need more support apart for the experienced Suranga Lakmal and Usman Shinwari. They still have the opportunity to add 1 more overseas player before November. 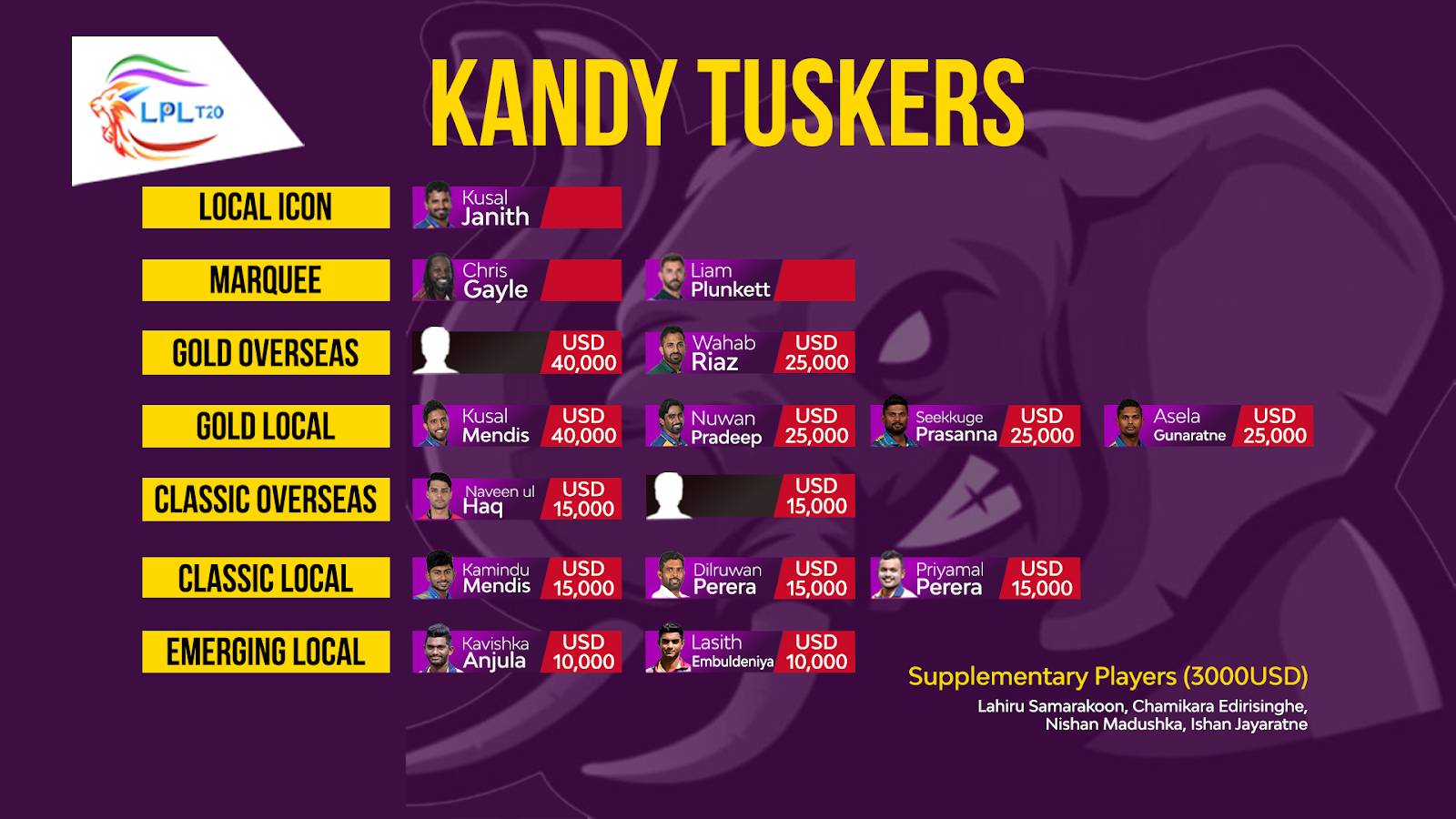 Kandy Tuskers boasts a great pace attack with the likes of Liam Plunkett, Wahab Riaz, Nuwan Pradeep and Naveen ul Haq. Asela Gunaratne can also contribute to the pace battery as an all-rounder.

Apart from the big names such as Chris Gayle, Kusal Perera and Kusal Mendis, the Tuskers will need more batting power in their middle order which is currently lacking with this squad. Even if they play with all of their all-rounders; Asela Gunaratne, Seekkuge Prasanna and Kamindu Mendis they have only 6 batting options in the squad with no replacements to choose from.

The spin department also looks a bit light with red ball specialists Dilruwan Perera, Lasith Embuldeniya and inexperienced Kamindu Mendis being the options they have apart from all-rounder Seekkuge Prasanna.

So that’s the makeup of the squads for LPL 2020. Who do you think made the most of the player draft? Let us know in the comments section below.