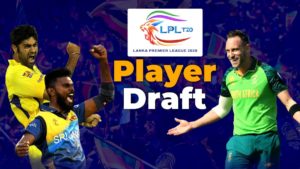 The player draft of the tournament was held on the 19th of October online with the participation of Sri Lanka Cricket officials, team owners and coaches. Each franchise was allowed to pick 20 players for their squad respective squad, including 14 locals and 6 overseas players.