In the tea industry, the tea taster reigns supreme. Yet strangely enough tea tasting begins with the plucker. This is because the taster’s judgment depends on how the leaves have been plucked. There are two forms of plucking: fine and coarse. The former is essential to a good cup of tea, and as a rule it involves the plucking of the leaf and the bud. Coarse plucking, as the name suggests, on the other hand produces teas of inferior quality – A history of our tea – Uditha Devapriya Medium August 2019

The long term future of the tea industry in Sri Lanka is dependent on one single factor and that is who will be plucking tea leaves in the years to come. 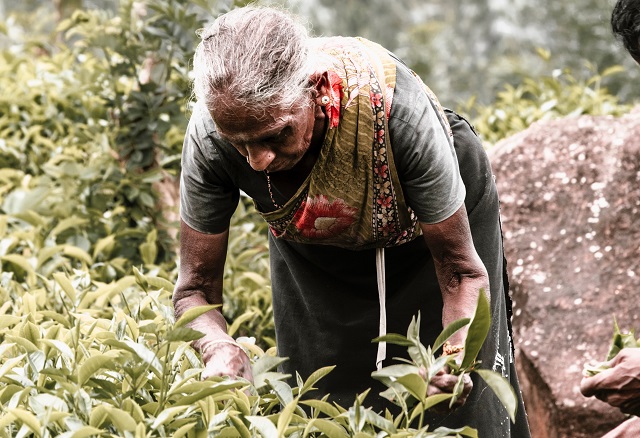 The traditional female plantation worker with a big basket on her back, underpaid, unappreciated and physically drained, would be a diminishing breed of workers as the next generation of such workers would be better educated and in more gainful employment. The terrain of most tea plantations is such that mechanization will be difficult if not impossible, and even if it were possible, it will diminish the quality of tea that the country is famous for and takes pride in.However, in the longer term, introduction of appropriate mechanization methods may be the only way the industry could survive as a viable economic agriculture produce in the country.

Tea plucking has been the vocation of the plantation sector Tamils, primarily the women amongst them, since tea was introduced to Sri Lanka, then Ceylon in 1832. Indian Tamils as they were called for a long time, were treated like slaves, some opine that many of them are still treated as slaves even today, and their treatment as sub humans, paying them a pittance for their labour, providing them with inhuman living conditions, suited the rich landowners and industrialists. This labour force was exploited and kept in such sub human conditions as it benefited the land owners who could keep their production costs low and maximize profits.

Over the years, life has changed to a degree for the plantation sector, and there has been an increasing sideways and upwards mobility for many Tamils in the plantation sector. In a 2019 publication by the International Centre for Ethnic Studies titled Up-country Tamils: Charting a New Future in Sri Lanka, (Edited by Daniel Bass and B. Skanthakumar), these changes, and what has not changed, has been researched and well-articulated.This publication is a must read for economic planners, and for those engaged in social studies in order to get an insight into the plight of many in the plantation sector, especially the women.

The following extract from this publication is very relevant to the trajectory of the future of the tea industry in Sri Lanka. Quote “A majority of tea plantation workers are women, and it continues to be one of the few jobs accessible to Upcountry Tamil women born into the plantations. The large numbers of women in the plantation workforce gives it a gendered as well as class and ethnic character. Traditional, patriarchal gender norms persist in the Up-country, as is the case throughout the island, especially involving household chores as a woman’s duty, side by side with long work hours in the plantations. The changing labour dynamics on the plantations and the increased outmigration to urban areas, overseas employment and for education receives considerable attention from contributors to this volume.

Few Up-country Tamils would probably want to work on tea plantations, if they have any other options. In recent decades, thousands of Upcountry Tamils have migrated to urban areas, especially Colombo, for work in garment factories and in the informal economy, especially domestic work for women and shop assistants, drivers, and construction labourers for men “unquote.

The strengths, weaknesses, opportunities and threats faced by the industry has been discussed by many. President Gotabaya Rajapaksa himself chaired a recent meeting recently to discuss the current status of the industry, how some impediments may be overcome in order to ensure it continues as a major export and a foreign exchange earner.

It is unclear however whether thought has been given to the status of the industry say in 10 -15 years and beyond, outside the discussions on cost of production, wage pressures, uplifting living conditions of workers, fertilising plants, use of chemicals, value adding, threats from other major tea producers in Africa, India, Vietnam, China, Kenya etc.

The fundamental question as to who would be available to pluck tea leaves in 10-15 years and beyond does not seem to have been addressed.

The absolute right of the next and coming generations of plantation Tamils to seek a better and a different life for themselves and their families, through better educational opportunities, branching into other vocations and moving into other areas outside their traditional areas, for security reasons as well as for alternate economic opportunities, does not seem to have received the attention of the planners and the public to the extent it should have.

The current plight of the rubber industry, where many plantations are confronted with the inability to tap rubber due to a shortage of tappers, will progressively impact on the tea industry when plantations find that tea plucking is no longer a vocation that those in plantations wish to engage in.

Tea production is one of the main sources of foreign exchange for Sri Lanka (formerly called Ceylon), and accounts for some 3% of GDP, contributing over US$1.5 billion to the economy of Sri Lanka. It employs, directly or indirectly, over 1 million people. In addition, tea planting by smallholders is the source of employment for thousands whilst it is also the main form of livelihoods for tens of thousands of families. Sri Lanka is the world’s fourth-largest producer of tea.

Amongst the difficulties faced by the tea industry in Sri Lanka, the low planting rate, low productivity, high cost of production, stagnant and shrinking tea growing land, and labour shortages have been highlighted.Fluctuations in exports and production in the tea industry, and importantly, the availability of mass produced, low production cost tea in African countries and India have been listed as contributing factors.

Experts in the industry need to take into all of the above factors and others, and very importantly the dilemma that the industry will face without tea pluckers in time to come when they plan the future of the industry. Such a plan should have immediate, medium term and long term goals and strategies.In the medium to long term, strategies like innovations, mechanisation opportunities and value adding, perhaps should form the basis for the industry, along with a strong marketing strategy, while maintaining as best as possible, the existing methodologies for meeting market demand.

Planting more tea when tea pluckers are hard to find, would be like planting more rubber where there are no tappers.

Profit sharing with tea pluckers and others directly engaged in plantation work, strengthening the tea small holder base and reducing large acreages of tea in some areas, where a family unit as owners of the holding would be responsible for managing the holding including tea plucking, and building smaller tea factories to cater to clusters of small holdings in order process plucked tea efficiently and an in a timely manner, and at low costs, would be strategies that may be considered.

Another longer term bastion of the tea industry should be an efficient, effective and independent research organization. While the Tea Research Institute has dome yeoman service and continues to do so, the threats faced by the industry calls for a more robust and forward looking research organization, perhaps even bi fold organizations.

One entity to undertake crop research directly associated with the tea growing environment (soil conditions, fertilizer, weedicides, pesticides, plant deceases and developing decease resistant products and mechanisms, etc) and the other, to research on value adding with a marketing focus.

These entities should work very closely with the tea growers, both large plantations and small holdings, and their orientation should be to serve the growers. There has to be much more collaboration between crop research institutes and the universities.  The entities should be free from politicians and political interference and they could be formed as government owned, but independent organizations as distinct to government departments.

The research entity that is focused on supporting marketing strategies, should essentially be oriented towards the marketing efforts and plans of private sector entities who are focused on value adding goals and objectives.

The tea industry should take note of the fact that connoisseurs of tea, who look for nothing but loose leaf tea, are a dwindling clientele, unless the marketing strategies in place to maintain, and widen this clientele. A large majority of tea drinkers are now tea bag users at home and in restaurants. Iced tea (particularly in the US but increasing in popularity elsewhere also), various varieties of flavoured teas are replacing the connoisseur tea market. The demand for loose leaf tea does exist and will continue to do so, but the bulk of that market, which is not a traditional connoisseur market but consisting mainly of clients who want strong, black tea, would increasingly be supplied by African countries and India.

The question of sustainability of the industry from the point of view of soil degradation, also needs to be factored in when medium to long term strategies are formulated.  Since 1863 tea leaves have been exported but only about 25% of it is extracted when tea is brewed. The rest (75%) ends up as discarded organic matter enriching the soil of the importing countries at the cost of depleting Sri Lanka’s own soils. Besides this the shipping, warehousing and handling costs for 75% of tea that is eventually discarded,is an impost that maybe avoided by value adding mechanisms.

Thought has to be given to researching activities that would focus on sustainability of the industry from both aspects noted above.It is now known that technology has been developed to manufacture liquid tea concentrate with sensory properties quite similar to freshly brewed tea. The writer is aware of a technology startup company which has developed this tea concentrate and is looking for investors to commercialize it.

If this technology is perfected, and introduced in Sri Lanka, and the marketing strategy includes creating a demand for such a product, Sri Lanka could actually export the concentrate and keep the organic matter behind and plough back as organic matter into the tea fields continuously, maintaining somewhat the soil fertility that is important for sustainability. The export price would also be much lower than shipping tea leaves or bags in bulk.

The long term future of the tea industry depends on innovation and adaptability to changing consumption patterns and methods. While the overall clientele will consist of even connoisseurs, but a smaller number, and tea bag consumers, the economic future of the industry may lie in a product like tea concentrate with its tea flavour and aroma, which could be very easily made into a traditional cup of tea, or an iced tea or a flavoured tea.

There may be other innovations that will add value to tea and sustain its future as one of the key income generators to the country. Lack of innovation on the other hand will result in Sri Lanka losing a key contributor to its coffers, towards direct and indirect employment, and overall, to its economy itself.