A veteran politician represents the Tamil community in Sri Lanka offered an alternative to 20th Amendment and for a new constitution.

We represent the TULF and I am its Secretary General. I have lived in this country for 82 years and I was just 13+ when the country gained its Independence in 1948. The TULF had been a strong Democratic Party that had 18 members in Parliament. It created history in the democratic world by asking all its 18 Members of Parliament to quit Parliament as a protest against the decision of the government to extend its term of office by a referendum, for a further period of six years. It created history again in 2004 by suffering a stunning defeat and got completely routed, with all the candidates losing their seats, due to intimidation by thugs and large scale impersonations.  The government did not take any remedial measures since there was no provision in the election law to annul the election completely in one electoral district. A request was made by the defeated candidates and the election monitors was not considered since there was no provision in the law for that. Our party has grievances and we need a change. 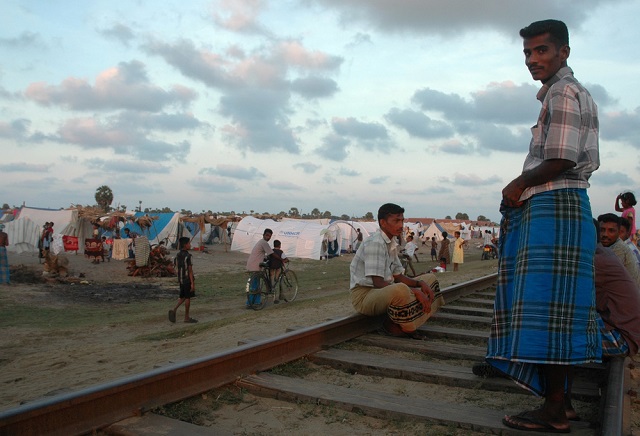 The TULF is very much opposed to the conversion of the existing Parliament into a Constituent Assembly. It is equally opposed for the adoption of a new constitution. We ought to be satisfied with amendments to the existing constitution. The executive presidency should be abolished. We are in full agreement with that. Likewise the matters that we want abolished or want to include could be identified and the relevant sections can be introduced as amendments to the constitution. That will simplify the process much. The most controversial issues today are   the devolution of powers relating to Lands and Police could be considered with certain limitations. What do we do with the demands for a federal solution and the merger of the North and the East.

Why can’t we identify the issues and bring amendments to suite our needs, without wasting our time and spending several millions of money and taking a big risk in the drafting of a new constitution. Certain aspirations of the minorities also could be accommodated through amendments.

We see today several proposals and demands are coming from the people most of which will never muster enough support. Some demand the sun and the moon. Some come out with proposals that are not acceptable even to the President and the Prime Minister. Many Ministers come out openly against some proposals. The opposition is up in arms opposing even proposals that appear to be reasonable. I am positively sure that the new constitution will find itself difficult to sail through the Parliament and will face more problems when it is referred for a referendum.

I suggest the adoption of  the Indian Model as a solution to our problem. When Hon Ranil Wickramasinghe contested the Presidential Election in 2005, if I remember correct, he gave an interview to the TV, supporting the Indian Model as a solution to the minority problem. With the present setup without being sure of what number of the Members of the Constituent Assembly will support all sections of the new draft constitution, I predict that an attempt to draft a new constitution will prove a total failure and cause enough disappointment and frustration to the minorities who had been given full hopes of a peaceful settlement. Furthermore some years back a few Ministers including Hon.MaithiripalaSrisena when he was a Minister and Secretary of the SLFP, and Hon. NimalSiripala De Silva, five other Ministers, a few MPs from the UNP and other persons like Hon.RanilWickramasinghe former Prime Minister, the former Speaker Hon. KaruJeyasooriya and the President  of the UNP Hon.MalikSamarawickrama were consulted by a team from the TULF  with the Indian proposal. None of them showed any opposition to our proposal and appeared as if they were supporting them.

I had been always of the view that a solution under a unitary system will never help to find a solution and as the only alternative the Indian Model may be adopted, without leaving room for any division of the country, if necessary with guarantees by India. I wish to quote here an extract of my speech delivered on the 23rd of January 2008 at Temple trees, at the handing over ceremony of the APRC proposals by Prof. TissaVitharane to the former President.

It is no secret that we had been agitating for a solution based on the Federal concept and also offered to accept the Indian Model as the only alternative, if the term Federal is allergic to anyone. We have not changed our views in this matter and in the matter of merger of the North and the East. We assure everybody that while spurning violence, we will, by non-violent means and in a friendly way, continue to persuade the citizens of our country to agree that no permanent solution can be found under a Unitary System. We will continue to dispel the fears of those who think that the country will be divided. We will take all steps to erase off from the minds of our people the idea of separation and to strongly support the concept of a United Sri Lanka.

Under the circumstances I strongly urge to drop the idea of a new constitution and to try to solve the problems with suitable amendments giving priority to the unresolved longstanding problems of the suffering people of Indian origin. As an alternative we may consider the recommendations of the expert panel which was very much welcomed by many people and the reasons for the failure of its implementation is not known.  APRC proposal is also one that could be considered. I strongly urge the addition of a strong chapter on Bill of Rights as found in the South African constitution, with heavy penalties for any violations. I am sure it will solve half of our problems. In the interest of the country it is advisable to the Tamil people to avoid confrontation and remain united, accepting the Indian Model and the South African Bill of Rights embodied in the new constitution  as a solution for the ethnic problem. We wish to reiterate that the  federal solution will be the best but depending on the circumstances the TULF feels that Indian Model is the best option as an alternative  to a federal solution.

I hope everyone will agree with us that this proposal will be welcomed and may be accepted as a solution by all who want peace in this country.