Prime Minister Rajapaksa has a very high regard for me not because of any political affiliations—our military had never got involved in politics—but because I had trained his second son Yoshitha in the Navy.

The usually very calm and quiet Welikada Prison, where most of the long-serving prisoners are kept, became very busy on 29th Nov., 2018. The reason was my presence. Mr. C. Pallegama came to visit me early in the morning. I met him at the Chief Jailer’s office. Mr. Pallegama, a dear friend of mine and respected public administrator, worked as the Director General of Prisons. When I was the Commander of the Navy, Mr. Pallegama was the Director General of the Civil Defence Force. Our wives are also very close friends, and children, too, know each other well. He was very sad to see me in jail. He requested all prison personnel to look after me well. The time was around 8.00 a.m. 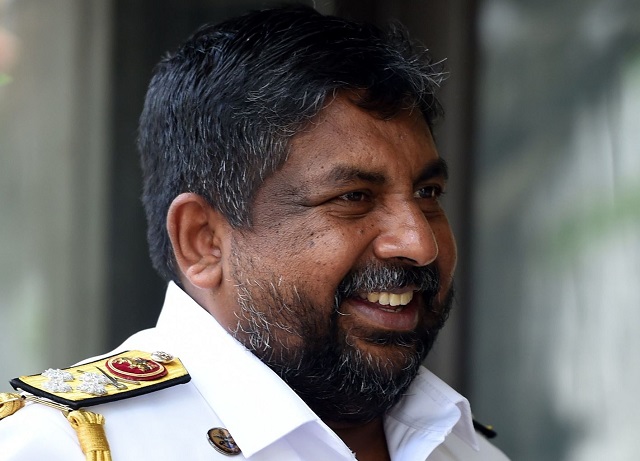 Prison officials made arrangements for my meals to be brought from home. It is a fine arrangement. There had to be two tiffin carriers with padlock provision. One key was kept with me and the other with the person who brought food from home. The guards at the gate would open the tiffin carrier in front of the person who brought it, check it, then lock it and take it over. Then they would detail a special duty prisoner to take it to my cell, escorted by a prison guard. He would take away the other tiffin carrier and hand it over to the person who brought me food. That arrangement was in place to prevent my food from being tampered. Prison officials were very concerned about my security. They took extra precautions to ensure my safety. I was fortunate to eat food cooked by Yamuna. I thought her tears had been mixed with the food. She has suffered so much during the war years, fearing for my safety. She brought up our son singlehandedly as I was away, and now she was suffering agony, again.

I fed the kitty, my cellmate. I found a metal plate in the cell and cleaned it well. The kitty would have brown rice string hoppers, Linna fish curry, dhal curry and a little pol sambol. “Eat kitty, you are very lucky to eat food prepared by the First Lady of the Sri Lankan Military!” I muttered to myself.

While I was having breakfast, a message came for me to come to the Chief Jailer’s office as my wife and son had come to see me. It was difficult! Yamuna was crying, my son was looking very sad, and my sister-in-law was trying to calm her down. Mr. Pallegama and his wife had accompanied them. “A friend in need is a friend indeed”.

Yamuna narrated all what had happened following my arrest. She has gone with our son to meet the President, who knew me well. I used to call the President in the morning to brief him on the security situation. However, when I called him to say I was going to courts, the President had been busy at a meeting, and, therefore, I could not contact him.

My friends, Ana and Nirmala De Silva, Naeem, my Navy friends Shemal, Piyal, Jagath and Niraja visited my home. Ana and Nirmala remained until late night giving moral support to Yamuna. Shemal’s wife Carmel had been a tower of strength to Yamuna. I thank all of you for having been with us during the trouble!

Defence Secretary Hemasiri Fernando has been a close friend of mine for a long time. He was a Volunteer Lieutenant Commander in the Navy, much senior to us and three-time National Shooting Champion in the 1980s. In fact, he is the one who taught me the basics of sharp shooting at the Welisara Navy firing range when I was a Midshipman in 1981/82. He faced the enemy with us in the Naval Detachment Kuchchaveli in 1985. Mr. Fernando also visited my home to reassure my family.

The prison became a hive of activity again, when it was announced that the Prime Minister would visit me shortly. Prime Minister Mahinda Rajapaksa arrived gracefully with his charming smile. He tapped my shoulder and said, “How are you Ravi?” I said I was fine. I knew even though I said I was fine, the President and the PM were very angry and upset about what had happened. Judge Advocate of the Navy, Shavendra Fernando, PC, accompanied the PM. Yamuna was sobbing in the back.

Prime Minister Rajapaksa has a very high regard for me not because of any political affiliations—our military had never got involved in politics—but because I had trained his second son Yoshitha in the Navy.

I had to be strong during difficult times! Usually, it is visitor who console prisoners, but in my case, it was the other way around. Some of them burst into tears on seeing me. So, I said Yamuna not to come again to see me, and I told my son to look after her. I told her I would refuse to see any visitors until 5th December. I am sure the prison officials were very happy with my decision as more than 10 people had already visited me during the last two hours.

The kitty had finished his breakfast and was waiting for me in my cell when I returned after saying goodbye to Yamuna and son. It must have been wondering where on earth I had vanished in the middle of my breakfast. He had now become my friend. He sat close to me and allowed me to touch him. My mind remembered Rexy, the lovely German Shepherd who had died six months back after being with us for more than 12 years.

Even though I had decided to receive no visitors, I could not refuse to see the religious leaders who wanted to see me. Chief Incumbent of the Nagadeepa Temple, Jaffna, was the first religious leader to see me. He must have left Jaffna at night to be at Welikada by 11.00 am. Our relationship goes back to 1984, when he was ‘Podi Hamuduruwo’ to us. I was a young Sub Lieutenant who was appointed as Officer-in-Charge of the Naval Detachment Nainativu when I first met Podi Hamuduruwo. Our primary task was to protect the Nagadeepa Raja Maha Viharaya and the two priests who were living there. We had an Army platoon also stationed with us to help us with land security. Living in Nainativu was very difficult, at the time. There was only one well, providing drinking water. We had to bath in salt water. Soap or shampoo could not be used as a result. There was no power. A small generator helped light up the perimeter fence. An old Patrol Craft (P110) from Karainagar brought our victuals every other day. Podi Hamudiruwo used to joke that when the P 110 engines were started in Karainagar, it could be heard in Nagadeepa! It was such an old Patrol Craft with very noisy engines.

However, we did our duty with utmost dedication and commitment. I took my own decisions as OIC, including giving dana and gilanpasa to the two priests daily from our rations—a meritorious deed the Navy performs even today. The Naval Base, Karainagar, is far away. I had to train and keep my boys, combat ready, to face any eventuality. I knew that I would get reinforcements only after 24 hours in case of an enemy attack. We took our duties very seriously. I went on leave after being on duty for two months at a stretch. That, too, only for a short period. Nagadeepa was my life.

After the LTTE carried out an attack near the Sri Maha Bodhi on 14 May 1985, in Anuradhapura, killing 146 innocent men, women and children, the entire country knew that the next LTTE target would be the Nagadeepa Temple. The terrorists who carried out the massacre was led by the Mannar LTTE leader Victor Fiyuslas. We were determined to protect the temple and priests at any cost. We patrolled the island day and night and slept only a few hours during day time. Podi Hamuduruwo was always with us. He was fluent in Tamil, having studied in the island school. He knew everyone there and the islanders respected him. Whenever they saw him on the road, they would run towards him and worship him. He was respectfully known as ‘Podi Swami’ to the islanders.

According to the Mahawamsa, Nagadeepa was visited by the Buddha during his second visit to Sri Lanka, five years after attaining Enlightenment. to settle a dispute between two Naga-tribe kings, Chulodhara and Mahodara. So, this temple is one of the most sacred places in Sri Lanka. I consider protecting Nagadeepa as the most important mission during my 39 years in uniform.

So, the Chief Incumbent of the Nagadeepa Temple and Chief Sanga Nayaka of the Northern Province, Ven Nawadagala Paddumakitti Tissa Thera, visited me in Prison with his junior priest. I saw tears on his eyes! Our bond is unique. He had seen me rise from Sub Lieutenant to Admiral. He was always there to bless me and my family whenever I reached a turning point in my career. He may not have expected to see me in prison, especially during my last year in uniform.