A Brandix factory worker told this writer last week that employees are not supplied with proper protective health equipment and are subjected to brutal exploitation. Workers’ leave had been cut and their workday extended to about 10 hours.

Sri Lankan health authorities reported yesterday that the number of coronavirus patients had doubled in the week since October 4, climbing to a total of 4,702 and 13 deaths. All indications point to a surge of COVID-19 throughout the country, with infections reported in 22 of the country’s 24 districts. 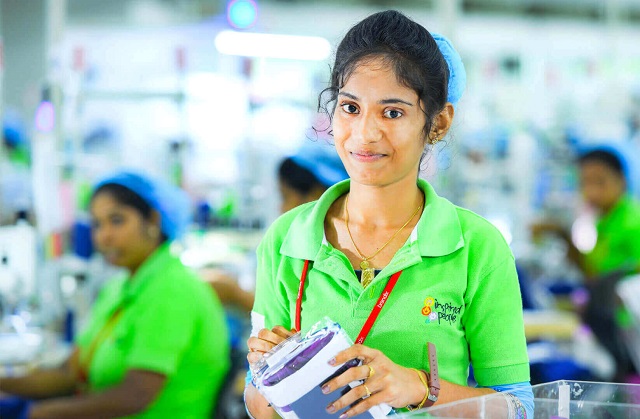 The latest figures puncture President Gotabhaya Rajapakse’s boasts that his administration, unlike governments in other countries, has controlled the virus. The increased number of infections in Sri Lanka has occurred as the number of cases globally exceeds 37 million and the death toll surpasses one million.

The previous, relatively low number of COVID-19 infections in Sri Lanka is mainly the result of the government’s refusal to carry out systematic testing. Medical experts have demanded that there should be at least 5,000 tests per day.

On October 4, a Brandix Fast Fashion worker from the company’s Minuwangoda plant tested COVID-19 positive at Gampaha Hospital. Management only allowed the female worker to enter the hospital after she insisted that she was sick and could not work without treatment.

Health authorities began testing other workers at the plant, discovering that more than 1,000 out of 1,400 employed at the plant and their associates were infected. Some workers have been hospitalised and others sent to quarantine centres.

Brandix is one of Sri Lanka’s largest apparel manufacturers, with factories in multiple countries. It employs about 50,000 workers at different plants across the country. The company produces apparel for US and European retail giants, including Gap, Victoria’s Secret and Marks & Spencer.

The densely-populated Minuwangoda is situated in Gampaha district and adjacent to Colombo. It has six free trade zones, including Katunayake Free Trade Zone (KFTZ). The government has now imposed a lockdown across many parts of this district.

A Brandix factory worker told this writer last week that employees are not supplied with proper protective health equipment and are subjected to brutal exploitation. Workers’ leave had been cut and their workday extended to about 10 hours.

The worker explained that approximately 200 employees had experienced fevers in the weeks prior to the detection of the infected worker. When employees previously reported their ill health, management responded by informing them that it was just normal influenza and that production targets had to be met, because the company had an urgent order from a foreign buyer. Workers’ leave has been cut and they have been working for about ten hours a day.

The unsafe health conditions at Brandix are common in all Sri Lankan factories and institutions, ever since they were ordered to reopen by President Rajapakse at the end of April and May. Other factories in the Gampaha district have reported coronavirus infections and three factories have closed in the KFTZ in the past week.

Yesterday, KFTZ company owners’ secretary Dammika Fernando, however, said that the free trade zone would not shut down. He said that although there were 36,000 workers at KFTZ, only 8,000 were attending because of curfew and lockdown measures in adjoining areas in the district.

Irrespective of the seriousness of the threat posed by the highly-infectious disease, the Sri Lankan government and the ruling elite are pursuing the same policy as their global counterparts: profits must be maintained irrespective of the cost to human lives.

After a meeting with Fernando yesterday, Sri Lankan Labour Minister Nimal Siripala de Silva said that the government, the country and factories would be maintained normally “with health security methods.”

National Operation Centre for Prevention of COVID-19 Outbreak (NOCPCO) chairman Army Commander Shavendra Silva cynically declared that a nationwide lockdown “could prove oppressive to a majority of the public” and those “trying to eke out a living.”

Colombo is not concerned in the slightest about the plight of Sri Lankan workers. After refusing to take serious action to prevent the spread of the disease, President Rajapakse suddenly imposed a national lockdown on March 21, without any preparation or adequate social support for workers and the poor. A month later, the government started reopening the economy, in response to big business demands.

Last week, several wards and an operating theatre at Colombo National Hospital were shut down after a number of health workers tested positive for COVID-19 and some local hospitals were forced to close sections of their facilities. Several university students have also been infected.

In total disregard for the population’s health, scholarship exams went ahead on Sunday for hundreds of thousands of fifth-grade students, even from lockdown areas. Yesterday, the week-long Advance Level exams began, involving 350,000 students.

The government is attempting to downplay the seriousness of the pandemic outbreak, claiming that the “main cluster” is limited to Minuwangoda, where Brandix is located, and is controllable.

The state’s Medical Research Institute (MRI) director Dr. Jayaruwan Bandara, however, told the Derana television network on October 5 that COVID-19 had been present in the community for several of the past months and the situation was dangerous.

“From January to now this virus has somehow been present in the community. How else could we have now discovered a patient?” Bandara informed the network. The government responded by removing and replacing Bandara as MRI director.

Having rejected the warnings of medical experts, the government is attempting to blame the media and the population for the new outbreaks.

President Gotabhaya Rajapakse told an NOCPCO meeting that the government’s national “awareness campaign” had been “missed by the country’s mass media… [and the population] have also forgotten the prevalence of the disease.”

Avoiding any mention of the government’s low-testing regime, Rajapakse, said “the general public and the media are obliged to assist our initiatives to control the spread of the pandemic.”

In April, Rajapakse directed private institutions to reopen, with one-third of the workforce or of the required number of employees, while job and wages cuts were sanctioned by the labour minister with the support of the trade unions. Government statements about observing health and safety regulations were ritualistic and largely ignored by employers.

On top of this, the government almost stopped even the low number of tests being carried out. The media previously reported that it had recommended ordering 100,000 test kits, but no allocations were made, and no major overhaul or adequate funding provided to the health sector.

On October 9, the NOCPC reported that the 12 hospitals allocated for COVID-19 only had the capacity of 1,552 beds and 1,133 patients had been admitted to these hospitals.

Last Friday, the government announced its budget allocations for next year. While defence and internal security will receive about 500 billion rupees ($US2.7 billion), the health sector will only receive 159 billion rupees.

The government’s priority is not to protect the health and lives of millions of Sri Lankan workers and the poor, but to strengthen the state, in order to crush the mass social opposition that will inevitably erupt against the government and the ruling elite.