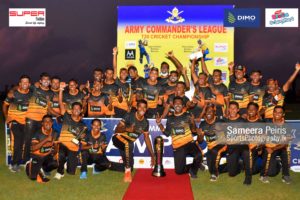 The Final of the inaugural Army Commanders League was held today (17) between the Southern Warriors and Northern Warriors at the Dombagoda Sri Lanka Army Ordinance Corps Ground.

Chandimal hits another fifty in the rain-curtailed game

The Skipper of Southern Warriors, Dinesh Chandimal, won the toss and elected to bat first against Seekkuge Prasanna’s team. Both teams qualified for the final with 3 wins out of 6 matches, knocking the Western and Eastern Warriors out of the competition.

The Southern Warriors were unable to get a good start as the best batsman of the tournament Skipper Chandimal and opener Priyantha Rathnayaka were dismissed early, but thanks to the efforts of Asantha Basnayaka and Wanindu de Silva who made 47 and 29 respectively, the Southerners were able to reach 159 at the expense of 6 wickets. 21-year-old seamer Heshan Hettiarachchi was the most successful with the ball for the Northern Warriors as he picked up 2 wickets. NW Skipper Seekkuge Prasanna who conjured up a hat-trick in the last game could only pick up 1 wicket in the final.

The chase looked like it would be a cakewalk for the Northern Warriors when their Skipper Prasanna went berserk in the middle, blasting 49 off 23 balls including 5 sixes. However with his dismissal, the middle order batsmen couldn’t complete the job they were assigned as the chasers lost the match by 10 runs. Off-spinner Suminda Lakshan created damage for the Northerners in the middle overs, taking 3 wickets for just 22 runs. Dasun Shanaka was at the crease in the 19th over on 34, but the veteran pacer Suranga Lakmal rattled his stumps in the 4th deliver of the penultimate over, before taking the 10th wicket in the same over.