Our rural population may be considered comparatively poor, but we are proud of our heritage, our religion and our way of life. We are friends to all, and enemies to none. We are a small nation, the envy of many.

The rate of poverty in Sri Lanka has come into highlight particularly after the pandemic and the sustainable economic goals, and it is right and ripe for consideration. 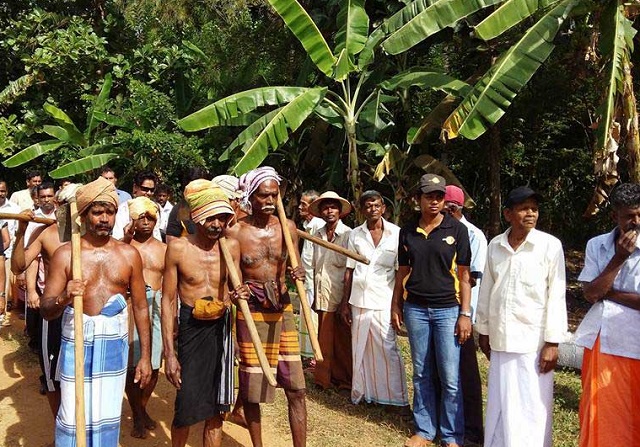 Due to reforms in the country during the 1980’s when poverty was reduced throughout of the country, but since and after ten years after the war, although some geographical areas and some some employment sectors saw a greater reduction in poverty levels, today we are about to witness a spike in not only Covid-19, but more so of poverty in rural and maybe in some urban areas of our country.

We can however,console ourselves that we are not alone in this conundrum, the whole world is in a similar  state of flux.

This is partly due to money income and price inflation, but more to do with the fear in our minds that we are not sure we can overcome the pandemic, if it goes on over a longer period than we originally imagined.

The thing about Sri Lanka rather than any other country, is that we have finally realised that our bread and butter lies with our rural population,our farmers,our agricultural sector workers, who have to provide our sustenance,during these perilous times, not the urban population who are either having to work part time,or work from home, or having  to live with the overhang of the threat to close down our factories, our hospitality outlets and airports for the immediate present.

According to Asanga Welikala in Groundviews : “Sri Lankans are an emotional people who like to register their political preferences in dramatic ways”. We want to be ahead of the rest.

Our rural population may be considered comparatively poor, but we are proud of our heritage, our religion and our way of life. We are friends to all, and enemies to none. We are a small nation, the envy of many.

As regions far from urban and commercial centres may experience the most poverty today as nine out of ten of our population live in rural areas, we see the poverty rate is as much as 40 percent. The wages of rice and agricultural farmers has remained stagnant for years. The income from their farms has shrunk over time.

Many who are poor in Sri Lanka have no means of escaping the poverty trap either for themselves or for their children. It is difficult for the poor people to save money to secure themselves or their families from the shocks of illness or death.

What governments in Sri Lanka have in the past always looked after the urban poverty population rather than the rural poverty.

We have seen since independence a preponderance of effort for urban poverty.

Of course, there have been Sarvayoda, Samudhi, Gammadda and volunteer efforts by charitable institutions to look after the poor and the poorest of the poor. These programmes have only been able to scratch the surface of rural poverty.

For the first time in the history of Sri Lanka that the Government of President Gothabaya has decided to put more emphasis on rural poverty, not alleviation but eradication.

For the first time in the history of Sri Lanka,the government has rescinded on aid given by a Foreign Government to develop a Light Railway Transport link from Colombo to Malabe in the affluent populous Western Province, against all advice by vested interests, for their comfort  in preference, perhaps, of giving emphasis to the resolving some of the problems of other parts of the island, with poverty eradication.

Sri Lanka,it seems has always has wanted development of the richer parts of the country, in preference for finding solutions for eradication of the rural poverty. Of course,money talks.

It is high time that money aid is devoted for not only poverty alleviation but for long term planning by not making poor people in the country, a lot poorer.

A Plan of Action

“Their complexity now demands a system of approach to understand the challenges faced by communities living in different regions, rather than only the affluent Western Province.

“It is water water everywhere,but nothing to drink”.

We have to contend with floods everywhere and scarcity of fresh drinking water for the rural poor.

Developing and improving drinking water and watershed management strategies is in my opinion, the most important need of the moment rather than the Light Railway Transport.

Life today is a choice of priorities.