The president promises “law and order”—by which he means “no law” and “order at gunpoint.”

The federal government’s killing of Michael Reinoehl exactly two months before the November 3 presidential race ought to have been one of the most high-profile election issues being discussed in America. Instead, it has been almost forgotten save for some media outlets starting to question the official narrative of his death. The little-known self-proclaimed “antifa” activist was killed by federal agents on September 3. Officers claimed that he had fired shots at them before being gunned down. But a week after his killing, the Washington Post found that “the wanted man wasn’t obviously armed.” 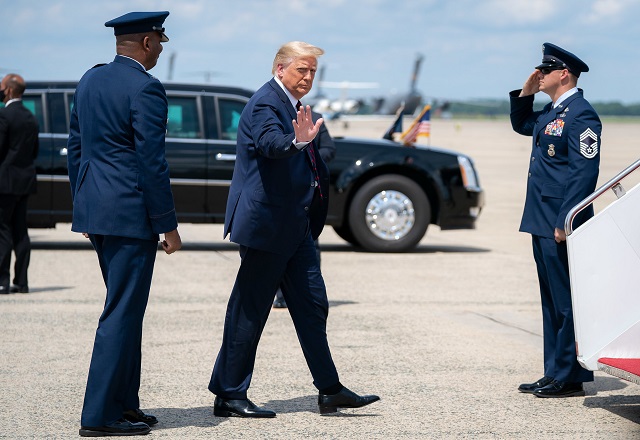 The Thurston County sheriff in Lacey, Washington, where the suspect was killed, released a public statement saying his investigation team “can confirm… that Mr. Reinoehl pointed the handgun that he had in his possession at the officers at the time of the shooting.” The U.S. Marshals Service whose forces were the ones that shot Reinoehl released a similar statement claiming that the fugitive task force that had been sent to his location “attempted to peacefully arrest him,” but, after being shot at, “Task force members responded to the threat and struck the suspect who was pronounced dead at the scene.”

News outlets took the official statements at their word and dutifully reported the incident as one where a suspected killer opened fire on officers and was fatally shot in the course of his arrest. In other words, there was “nothing to see here.” But according to a New York Times investigation six weeks after his death, it remains unclear “whether law enforcement officers made any serious attempt to arrest Mr. Reinoehl before killing him.”

According to nearly two dozen witnesses that the New York Times spoke to, “all but one said they did not hear officers identify themselves or give any commands before opening fire.” Even though Reinoehl was armed at the time of his death, his handgun was found in his pocket and an AR-style rifle in a bag in his car, suggesting he did not threaten the officers trying to arrest him as official accounts had initially claimed.

Reinoehl was wanted in connection to the fatal shooting of a Trump-supporting right-wing activist named Aaron J. Danielson during Black Lives Matter protests in Portland, Oregon. President Donald Trump ranted on Twitter on the day he was killed, “Why aren’t the Portland Police ARRESTING the cold blooded killer” and adding, “Everybody knows who this thug is.” Later he hailed the fatal shooting triumphantly, saying in a Fox News interview:

“We sent in the U.S. Marshals for the killer, the man who killed the young man on the street.… Two and a half days went by, and I put out [on Twitter], ‘When are you going to go get him?’ And the U.S. Marshals went in to get him, and they ended in a gunfight. This guy was a violent criminal, and the U.S. Marshals killed him. And I’ll tell you something—that’s the way it has to be. There has to be retribution when you have crime like this.”

In referring to Reinoehl as a “cold blooded killer” and “violent criminal” even though at the time of his death he was a suspect, Trump made clear that in his America, “law and order” means you are guilty before being proven so and can be targeted for extrajudicial assassination if those in power decide you deserve it. Such shocking words coming from any other head of state in the world would trigger instant condemnations from the U.S. State Department. Speaking to his supporters, Trump boasted of the “great job” that U.S. Marshals did in Portland, adding meaningfully, “you know what I mean.”

Attorney General William Barr, who appears to have no understanding of how the nation’s system of criminal justice is supposed to work, released a statement praising the federal troops’ actions and echoing Trump’s words in more official-sounding language. Barr called Reinoehl, “a dangerous fugitive, admitted Antifa member, and suspected murderer,” and said before any investigation into the killing was complete that “[w]hen Reinoehl attempted to escape arrest and produced a firearm, he was shot and killed by law enforcement officers.” In doing so, Barr too justified this extrajudicial assassination as Trump did and went as far as calling the whole incident, “a significant accomplishment in the ongoing effort to restore law and order to Portland and other cities.” He applauded “the fugitive task force team that located Reinoehl and prevented him from escaping justice.”

To Barr, the top law enforcement official in the nation, “justice” meant death, rather than arrest followed by charges and a fair trial. To Barr and Trump, the constant drumbeat of “law and order” is essentially a promise to fatally punish those perceived as enemies of the government.

In addition to the Washington Post and the New York Times, several other media outlets have corroborated that Reinoehl’s killing appeared unjustified. Rolling Stone characterizes one eyewitness’s account of the scene as “a violent ambush” that “resembled an execution.” Oregon Public Broadcasting in collaboration with ProPublica spoke to witnesses who said that the officers shot him without warning and “looked less like law enforcement officers than members of a right-wing militia.”

In a VICE News interview released just after his death, Reinoehl can be seen claiming that he acted in self-defense in Portland—just as an attorney for Kyle Rittenhouse, the Trump-supporting armed suspect in the Kenosha, Wisconsin, killing of two Black Lives Matter activists, said. With Reinoehl dead at the hands of U.S. Marshals, we will never know the truth.

Instead, Reinoehl now serves as the perfect symbol of the shadowy enemy that Trump rails against. A participant in Black Lives Matter protests, Reinoehl claimed he was “100% ANTIFA all the way.” The president’s promise to designate “ANTIFA” (which is an ideology, not an organization) as “a Terrorist Organization” has fed into dangerous notions designed to create panic among his base. It has raised the specter of “violent mobs” terrorizing communities that only swift government action of the sort aimed at Reinoehl can quell.

But who are the “violent mobs” really? In Trump’s world, armed self-defense is acceptable only for white supremacists who support him, not for the left-wing activists they routinely threaten and hurt. Since protests began earlier this year, according to NPR, “Right-wing extremists are turning cars into weapons, with reports of at least 50 vehicle-ramming incidents” at protests against police brutality. Conservative news outlets including Fox News and the Daily Caller have encouraged such attacks. Even the Department of Homeland Security’s latest threat assessment identifies, “racially and ethnically motivated violent extremists—specifically white supremacist extremists,” as “the most persistent and lethal threat in the Homeland” among what the agency designates as “Domestic Violent Extremists” or DVEs.

As if to underscore the threat, more than a dozen white men were just arrested (without being harmed) in connection with a kidnapping plot aimed at Michigan’s Governor Gretchen Whitmer. The governor, who is among several women who have faced Trump’s online ire, said, “I do believe that there are still serious threats that groups like this group, these domestic terrorists, are finding comfort and support in the rhetoric coming out of Republican leadership in the White House to our state house.”

In Trump’s America, white nationalist armed vigilante men reign supreme while those of us speaking out against fascism are symbolized by Reinoehl—and like him will be not be considered innocent until proven guilty. We will never know whether or not Reinoehl was guilty of murdering Danielson, as he was not given a chance to stand trial. In Trump’s America, there will be no law, only order. To Trump, “[t]here has to be retribution,” rather than due process. Among the many issues at stake in the November 3 election, this ought to be a central concern.

This article was produced by Economy for All, a project of the Independent Media Institute.

Sonali Kolhatkar is the founder, host and executive producer of “Rising Up With Sonali,” a television and radio show that airs on Free Speech TV and Pacifica stations.